The Germans are coming! Kraut-pop juggernaut Tokio Hotelhave a new album, Humanoid, due October 6 — and as twins Bill and Tom Kaulitz themselves recently told EW, they never expected the level of success they’ve found internationally (”We came from a small village … It was a lot of happy and lucky moments for us, and we are totally happy that we got the chance to do all this.”)
Listen to an exclusive snippet of the song “NOISE,” from Humanoid, below. and see if makes you feel happy and lucky:

LISTEN HERE
A little background on the track: Producer David Jost tells us: “Bill and Tom had the initial ideas for ‘NOISE.’ They roughly captured their ideas in their home studio in Germany and then sent them over to me and my partners in LA. A few days later Bill stood in front of the mic in our old recording studio in Hamburg. We could see him on a big screen in our LA studio, while we recorded him in real time.”
Adds Bill Kaulitz (pictured): “Two weeks later, Tom and I took a flight to LA, where we all finished the track together. When the song was done Tom was so pumped! Actually, the track almost became our first single.”
What do you think, readers — how does it compare to official first single “Automatic”?
español
Publicado por lucila 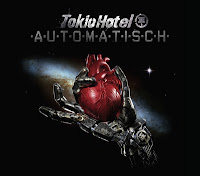